The activist side of K-pop in PeruGlobal Voices 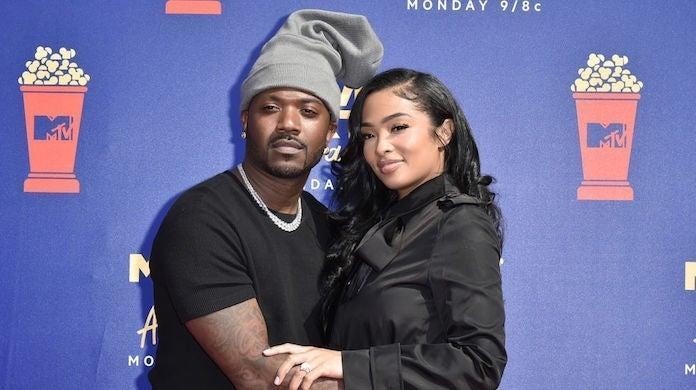 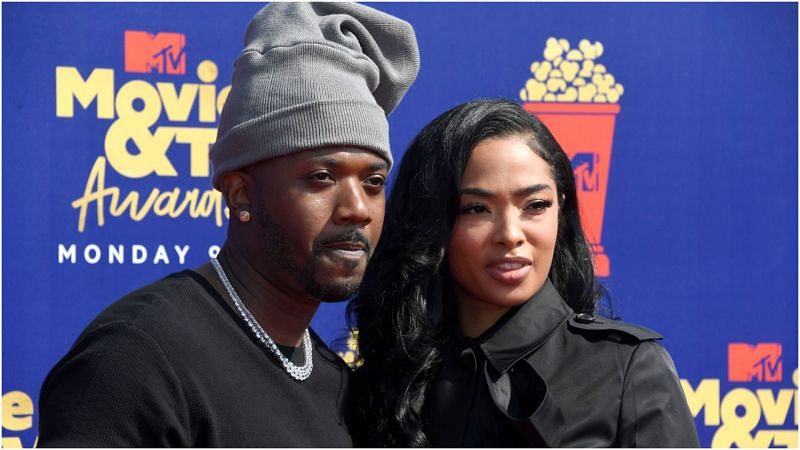 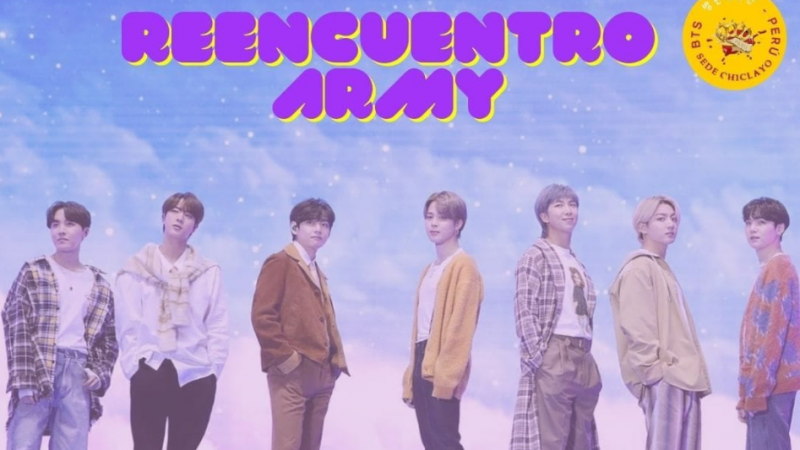 Adriana Velásquez originally wrote this article for The Antigone, it was edited, translated and republished by Global Voices.

The term K-pop is no longer foreign to Peru despite the distance that separates the country of more than 16,000 kilometers from South Korea, the country of origin of this musical genre. It is therefore not surprising that fan clubs, or fandoms, which often rally around social causes, are more successful in mobilizing large crowds for social and political protests in Peru.

K-pop fans are active all over the world. During last year’s Black Lives Matter protests following the murder of George Floyd in the United States, K-pop group BTS’s $ 1 million donation made headlines around the world. A little over 24 hours later, a group of fans of the group, One in an army, raised an additional $ 1 million for this cause.

K-pop activism has also spread to Latin America. In 2020, Peru faced a political crisis after President Martín Vizcarra was removed from office in what some Peruvians saw as a coup. The government then cracked down on mass protests against his successor Manuel Merino, which led to two dead and more than 100 injured. To support the protesters, kpoppers used Twitter to stop an attempt to discredit the protests against Merino, who only served for nine days. They used their numerous Twitter accounts to take over the # TerrorismoNuncaMás [NoMoreTerrorism] hashtag, which sought to delegitimize the protests, posting the tag with spam and therefore preventing any negative publicity from tarnishing the image of the protesters.

Miguel Sánchez, journalist and professor at the Catholic University of Peru, highlights the unique characteristics of kpopper cyberactivism such as the structure of fandoms, common goals and the use of public space.

On the other hand, social psychologist and K-pop fan Sandra Rivas indicates that kpoppers’ predisposition to manifest in cyberspace is based on the experience of trending their groups using social media algorithms. These skills are then reproduced when it comes to dealing with subjects of social or political interest.

According to Rivas, K-pop fandoms have two important characteristics that are different from typical Western music fan clubs: building a collective identity and marketing the K-pop industry. Rivas describes this collective as a tight-knit community where each fandom has its distinctive name and color. 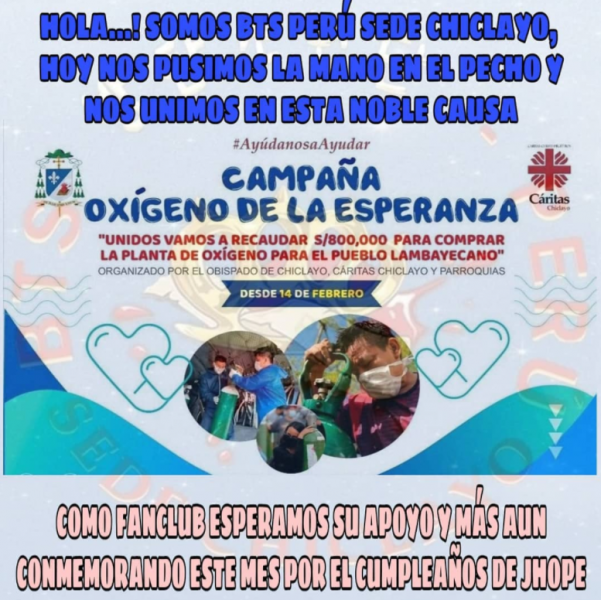 Image from the Facebook page of BTS Perú Sede Chiclayo

[Image translation: Hello … ! We are BTS Perú site Chiclayo| Today we put our hand on our chest to unite in this noble cause | #HelpUsHelp | Oxygen of Hope Campaign “Today we will raise 800,000 soles to buy an oxygen plant for Lambayecano” | Organized by the Chiclayo Bishopric, Caritas Chiclayo and Parishes | From February 14 | As a fan club we hope for your support and moreover the commemoration of this month for J-Hope’s birthday.]

In Latin America, however, the expansion has been more gradual. Gradually, the first K-pop fandoms were formed, even if they lacked visibility.

According to digital marketing expert Fernando Vega, in 2020, Peruvian kpoppers were responsible for up to 15 K-pop trending topics on Twitter in 30 days. “This K-pop boom, while not new, surprises with the strength of its metrics,” he said in the blog post. “In 90 days, there were 70 million mentions of Spanish throughout the Spanish-speaking Latin American world.”

Fabiana Tequenquea, member of BTS Chiclayo staff, joined a fandom in 2015. K-pop fandoms often hold various social outreach activities to commemorate the birthdays of their idols or the birthdays of their favorite bands. Tequenquea recalls that in 2016, they were able to carry out their first social action project, A Chocolate Christmas, thanks to new members of the fandom. They distributed chocolate, panettone and toys to the homeless. As BTS became more famous in Chiclayo, more and more members joined the fan club. As a result, more social awareness activities were carried out. 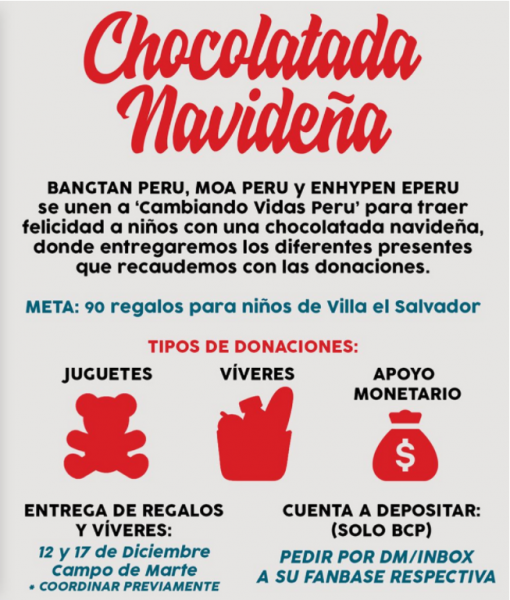 [Image translation: Christmas Chocolates | Bangtan Perú, Moa Perú and Enhypen Perú have joined forces with ‘Changing Lives Peru’ to bring children happiness in a Chocolate Christmas where donated gifts will be handed out. | Goal: 90 gifts for the children of Villa El Salvador | Types of donations: toys, food and money | Gifts and food delivered on December 12 and 17 at Campo de Marte (previous coordination) | To make a deposit, DM/Inbox your respective fan club for bank account details.

But, without a doubt, there was one donation that surpassed the rest. It was the largest donation at the national level from the ARMYs, one of the most established BTS fandoms, whose letters stand for Adorable Representative M.C for Youth. Three thousand soles (approximately 760 US dollars) were donated to implement an oxygen generator in Lima to commemorate the birthday of BTS member J-Hope. Organized by BTS Perú Projects, Peruvian ARMYs from different sites helped raise the money. “It was a great source of pride because K-pop fan clubs are sometimes overlooked and insulted for their taste in music. And it was an honor to have this effort positively recognized at the national level,” Tequenquea recalls.

For Tequenquea, the message BTS members share through their music is an inspiration to improve oneself, support others, and live in a better world. “As they have said: we are all equal, we all deserve support and respect,” she said.

Thanks to social media and K-pop globalization, more and more Peruvian fandoms are being formed and organized even before a band actually debuts. This phenomenon allows them to begin social outreach activities right away. This is the case with ENHYPEN, a K-pop group that sprung from I-LAND, a reality show competition. They debuted in November 2020, and before this, they already had a fandom in Peru.

For Keyla and Hienka, members of ENHYPEN PERÚ staff, it was clear they wanted to do social outreach from the start. “We have members who work in NGOs, so we always keep this in mind for activities we want to carry out on the band members’ birthdays,” Keyla says.

One of the most memorable activities was the Chocolate Christmas carried out last year with the NGO Cambiando Vidas Perú (Changing Lives Peru). “We asked for donations of money and food. We bought toys for 100 children, and as there were a lot of food donations, we made baskets that were raffled among those present. It was a lot of fun,” Keyla recalls.

It is worth noting that activism and social outreach are nothing new for kpoppers. Older fandoms already carried out small projects to help the community. Fiorella Mucha, a member of SONES Perú staff (a fandom of the band Girls Generation), says social outreach projects have been going on since 2011. In the beginning, there was an interest in helping animals such as collaborating with dog shelters. “SONES Perú is known for its love of animals,” Fiorella says.

​”A K-pop fandom not only focused on it [K-pop], but it also supports our company with the fact that we have something in common, ”says Hienka.

A “val” playlist on Spotify that mixes BTS songs with Peruvian cumbias. Last week, it was revealed that Dr. Dre will be headlining the Super Bowl LVI …