The constantly evolving music of the SUD group: from blues funk to pop rock, through soul and jazz

“The duty of an artist”, at the SMUSH gallery (340 Summit Ave.) until tomorrow.

“Top Ten Hits” at the Novado Gallery (110 Morgan St.) continues throughout the month.

Among other things, pop music is a form of visual art. It is seldom enough to create a melody that makes the world sing. This melody must also be linked to a recognizable image. The most effective delivery man in the iconography on which pop music depends is the artist’s own face. The singer’s face is a kind of mark, which helps to explain why it is often abstract, and often removed, from the work and placed on posters and advertisements. It also helps explain why a huge mural by David Bowie now overlooks the Holland Tunnel.

Bowie the human was a complicated and difficult man who openly flirted with Nazi imagery and ideology in the 1970s, and who may or may not have had a pernicious character when he said that Britain would benefit from fascist leadership. Bowie the icon, on the other hand, has simple connotations: generational change, androgyny, transhumanity and science fiction, artistic freedom. Adopting and spreading the icon diminishes and distorts David Bowie’s very complicated writing meaning, but without the icon the work would not have sold, and we might not even know who Bowie was. It’s the devil’s deal that all pop artists make – a reduction and simplification of their personalities into something that can be easily understood and mass marketed, in return for global visibility. 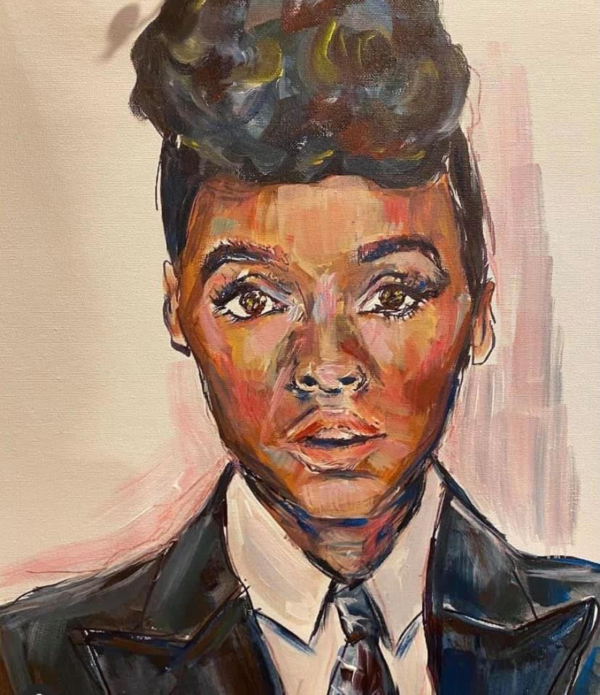 There’s a much, much smaller image of David Bowie in “An Artist’s Duty,” which ends at the SMUSH Gallery (340 Summit Ave.) on Saturday, June 12. She was painted in acrylic on canvas by the curator of the exhibition: Stephanie Geremito, an artist from Long Island who takes the socio-political statements of popular artists seriously. “The Duty of an Artist” is one of two local exhibitions that put the image of the songstress at the center of the show. Like “An Artist’s Duty”, “Top Ten Hits” at the Novado Gallery (110 Morgan St.) contains works inspired by street art and popular portrait techniques, and she places her famous subjects in a volatile world. . But the tone of the screen-printed and spray-painted canvases of St. Petersburg-born artist Denis Ouch is very different, as is his understanding of the pop star’s place in the global imagination.

Not everyone depicted in “An Artist’s Duty” is a popular musician. Grace Kim contributes oil paintings by activist artists, including writer Dakota Zitkála-Šá, transgender actress Laverne Cox and a portrait of Frederick Douglass which, like all good images of the abolitionist, launches a powerful accusation through time. Some aren’t even artists: Alexandra Ocasio-Cortez is there too, sort of, though she’s barely recognizable in a flat digital render by Sara Lauth. But the heart of the show is Geremito’s series of energetic paintings of new and old pop stars, which roar from their canvases like punk rock songs do. There is a carelessness in these renderings that befits the subjects well. At their best, they channel some of the large, bright and ungovernable energy that makes pop stars attractive to millions of people.

Which, if you’re a pop fan, means there’s a lot to enjoy here. But the thrills aren’t evenly spaced, and this inconsistency might say something about Geremito’s relationship to music, or iconography, or both. While it would be unfair to label certain portraits of older artists (a posed Jackson Browne, a steel-like Neil Young, a worn out John Lennon) as too reverent, it does not add much to the popular understanding of public figures that these Hall of Fame members strove to project. She does best when she stings the icon a bit. Ironically, given his fascination with rock history, his most revealing portraits are those of current artists. Sia Furler, for example, crackles with the childish playfulness and playfulness that animates her best pop writing; looks like she’s about to hit the frame and apply finger paint to your nose. Childish Gambino emerges, shirtless and strangely vulnerable, from a background of paint smeared with gray and green, his head bowed, sinister, beaming with despair. Harry Styles – the only artist to feature in this show and also in “Top Ten Hits” – tilts his head with the combination of camp recklessness and near-professional discernment that has always separated him from his bandmates in One Direction . Janelle Monáe, beautifully decked out in a jacket and tie, seems legitimately shocked that she is even under observation.

Geremito’s inspiration for the exhibition was Nina Simone’s famous statement that an artist has a duty to reflect the times in which she lives. .) The curator associates each of her portraits with quotes from her subjects on the better world they are determined to inaugurate. Yet the show’s most telling quote comes from REM frontman Michael Stipe, who points out that the most talked-about generation of pop musicians of artistic responsibility has presided over an unprecedented deterioration in political and environmental conditions. It is surely not the artists’ fault, but it undermines the claims of political importance that are often made on their behalf. How genuine was their activism and how much of an extension of the altruistic and transcendent characters they played professionally? Did they really reflect the times, or could it be better said that they reflected some rudimentary popular aspirations that had fallen, like so many others, into the steamroller of capitalist history? 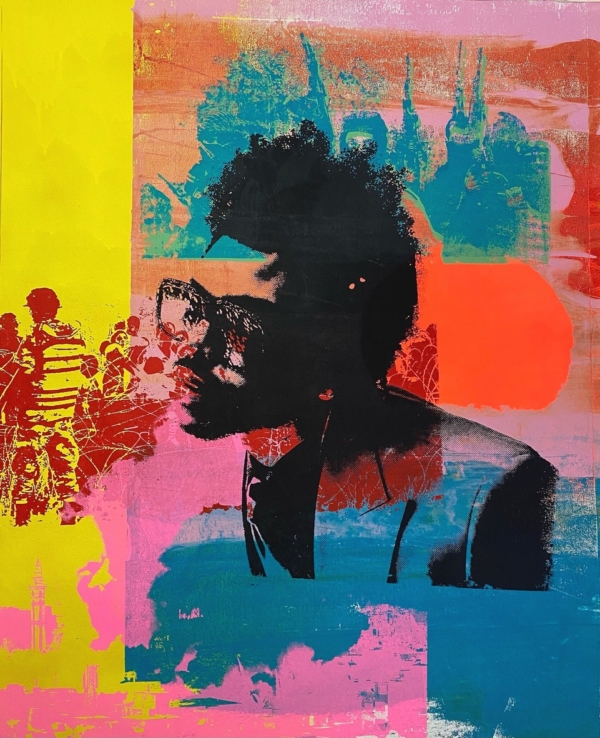 As a child growing up in Russia, Denis Ouch, who will be exhibiting at the Novato Gallery on June 19, had a more chilling view of these historic processes in action. There, the American and British pop star was marketed like any other product: the pop icon was the smiling face of the dreaded ram of Western consumer culture. His exhibition shows that Ouch loves pop music as much as Geremito. But while “An Artist’s Duty” is largely laudatory, “Top Ten Hits” has much darker undercurrents. Images of impassive faces of current stars, screen-printed in Warhol, float on ghostly representations of weapons, military dictators in full salute, tanks, barbed wire from battlefields. As Dua Lipa sends a seductive kiss from a circle of yellow spray paint, a balaclava insurgent lurks over her shoulder and fighters in photo-negative white parading across the canvas. Drake, decked out in an elegant gold chain, is layered on top of an array of grave and spectral military leaders, the Weeknd seems to exhale a strand of huddled refugees, and even the Dove of Peace turns out to be a logo of ‘business.

This is not just an ironic juxtaposition. It is also a recognition that the art star, flattened in two dimensions and made highly contrasted like a corporate badge, is an industrial export. Because Denis Ouch respects these musicians and understands the power of the images they made – and because of his striking use of vivid spray paint colors, brilliant like the cosmetics painted on Warhol’s images of Chairman Mao – he is able to keep the elements in his paintings in a kind of disturbing balance. The star’s face, and the qualities it represents, first of all captures the viewer’s attention and imagination. Yet the closer you look at the canvas, the more you’ll see: alien street scenes and hooded rifles, cannons, the gigantic, overwhelming wheels of armored vehicles. Is pop entertainment just a distraction from the horrors of a world in grave danger, and are pop artists, no matter how well-meaning, just agents of that distraction?

Those of us who believe in the power of popular music – and that includes Denis Ouch and Stéphanie Geremito – will surely say it’s more complicated than that. Even the most superficial pop stars truly have the ability to unite and inspire millions of people, and this influence is felt transnationally, regardless of borders and government restrictions. Artists who have the talent and charisma to project their personality and ideas through the emptiness of the consumer space are extremely rare: if it was easy to make a Taylor Swift or a Beyoncé, another would have already been made. . These artists may or may not reflect the era, as Nina Simone would have them, but they certainly channel and shape the dreams of their fans, and maybe even those who aren’t fans but could be. if they only listened without prejudice. That’s why we continue to paint them, draw them, screen print them and put their faces on t-shirts and tote bags. This is why we desperately want to enlist them in our political causes, and why we run after their fantastic energy like children with butterfly nets. We all know that what they are doing is the closest thing to magic that we will ever find in this material world.